Century of Locusts by Malika Mokeddem 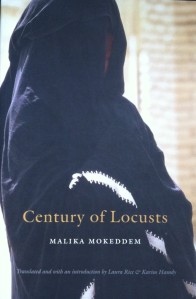 What first appears as a tiny moving shadow, no bigger than a fly, on the dazzling horizon slowly reveals itself as the grim shape of violence and death; in the destruction left behind—the mother’s broken body, the hidden child, the crying infant—begins the story of wandering and loss, of exile and desolation that sounds all the sad echoes of disappearing Bedouin life. Set in the first half of the twentieth century, Malika Mokeddem’s Century of Locusts combines the magic of exquisitely wrought desert landscapes, the intrigue of Bedouin tales of madmen and poets, and the personal pain of exile and isolation to evoke a way of life destroyed by the scourge of settler colonialism.
The book tells the braided tales of those left to resist: a wandering poet and his mute, stricken daughter, Yasmine; the lunatic Majnoun; and Majnoun’s murderous sidekick, Hassan, who twitches and squints with malevolence, lurking along the story’s shadowy borders. Rippling ever outward with allusions and echoes, the tale eventually encompasses Algeria’s legendary past, its colonial injustices, and its uncertain future, even as Mokeddem’s poetry and deft touch confer life and hope on the ravaged body of this desert land.

Authors/Translators
Malika Mokeddem is an Algerian exile who has lived most of her life in France. A medical doctor as well as a writer, she worked in Montpellier as a general practitioner focusing on the health needs of the immigrant North African community until recently, when death threats forced her to close her clinic. Century of Locusts won several literary awards in France, including the prix Littré. Laura Rice is an associate professor of comparative literature at Oregon State University. Karim Hamdy does research in the area of international development and is a teacher of French and Arabic at Oregon State University. Rice and Hamdy are coauthors of Departures, the translations of and critical essays on the selected writings of Isabelle Eberhardt.

“Many of Mokeddem’s sentences have the breath of poetry upon them. . . . Indeed, a question worth asking of literature in translation is whether it does not give us an unfamiliar English with powerful new shapes and cadences — the expressive possibilities of another language reinvigorate our own. One believes this to be true of the work of Laura Rice and Karim Hamdy here . . . . Mokeddem’s locusts become a most complex symbol, bleakly suggestive not just of man’s blindness and rapacity but also of the unswerving way of fate, deaf to human pleas and intentions.”—San Francisco Chronicle
“Mokeddem’s novel is a gem, brimming with beautifully rendered scenes . . . that remain indelible in the reader’s memory.”—Booklist

The author’s suggestive language undulates like desert dunes and swirls like the Sirocco, leaving the reader slightly bewildered, yet fascinated by the landscape of the human heart. —Aziza, Goodreads